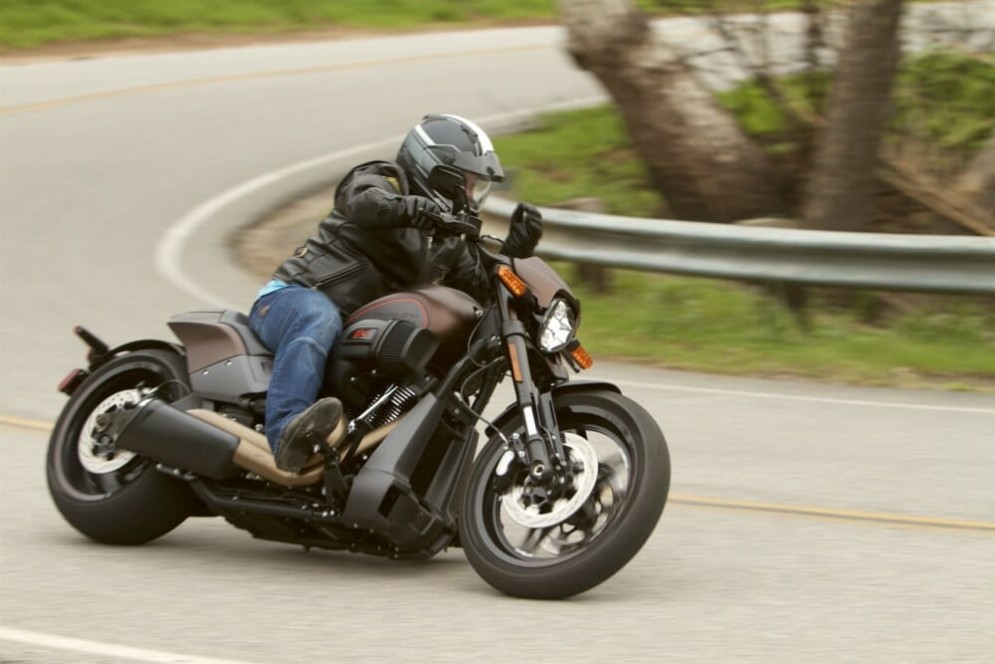 This new Softail® bike reaches performance heights that are out of this world. It’s backed by the revolutionary Milwaukee-Eight® 114 engine, which happens to be the most powerful engine you can get in a Harley Softail®. A power-packed engine isn’t complete without heaps of torque, which is yet another element that the FXDR™ delivers on. As soon as the stoplight turns green, you’ll be blasting off down the road, you’ll be dominating entrance ramps, and rolling on the passing power with ease. You’ll be beyond thrilled with this new level of performance, especially the bold 2-1-2 exhaust that produces that iconic rumble that is customary with every Harley motorcycle.

In addition to the amazing performance, there is also a brand new air intake system that’s specifically designed to enhance airflow to the engine. Many of the elements of this system were inspired by the Screamin’ Eagle® NHRA drag bikes and the Screamin’ Eagle® Heavy Breather. It consists of an exposed, forward-facing filter element, which is essential to helping the FXDR™ 114 run smoothly.

Another critical component of this new bike is the inverted-racing style fork with its single-cartridge technology. The result is a front wheel that remains firmly planted on the ground while you ride so that you’re flawless in your braking and handling for the duration of your ride. We all know that a high-quality suspension system is key in a Harley bike and the FXDR™ is no exception. This bike features a monoshock rear suspension that has a single coil-over-shock with innovative emulsion technology. Thanks to the optimized angle between the swingarm and frame, you’ll be guaranteed to have better travel and response time, every time. No matter what roads you take on, your ride will always be smooth with this suspension system.

The FXDR™ 114 takes an entirely new approach to the traditional Softail® frame that we’re used to. This new design transforms the bike into the most agile bike you’ll ever have the pleasure of riding. What’s the secret? The bike is built with various alloy and composite components that make the bike lighter, which allows it extra agility and also boosts the capability of the Softail® chassis. It’s no wonder that this bike is the smoothest model on the road.

Of course, we have to touch upon the unbelievable aesthetic value of this brand new Harley-Davidson® motorcycle. The FXDR™ 114 shines with its longer, leaner, sleeker appearance, which is courtesy of the stretched fuel tank. It still maintains those traditional Softail® design elements for that totally aggressive, powerful look that you expect from a Harley motorcycle. This bike also offers several modern features like LED turn signals, a rear light, digital riser gauge, keyless ignition and the LED Daymaker™ headlamp.

You’ll definitely want to live life on the edge with the Harley-Davidson® 2019 FXDR™ 114. All the best features will be right at your fingertips all the time. Powerful performance, smooth handling, and classic style are just around the corner. Stop by Peterson’s Harley-Davidson® to check it out for yourself!